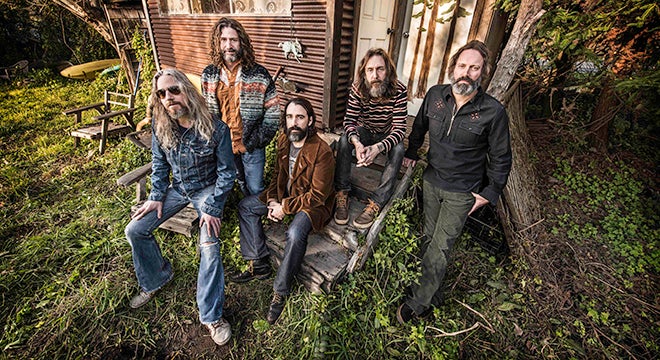 The Chris Robinson Brotherhood has been rescheduled to Sunday, Oct 8.  All tickets will be honored for the new date. Public safety of our patrons & employees is our highest priority. If refunds are needed, they are available at point of purchase.

"Masterful players on a Grail-like search for the cosmic heart of California." - MOJO

The Chris Robinson Brotherhood are on the road in 2017 supporting their fourth studio album, ‘Anyway You Love, We Know How You Feel,’ and its follow up companion EP, ‘If You Lived Here, You Would Be Home By Now,’ both out via Robinson's Silver Arrow Records. Tracks have already been laid for another new studio album and ‘Betty’s Blends, Vol. 3’ live release later this year.

Gathering in northern California on the side of a mountain overlooking the foggy Pacific Ocean to capture what would become their latest studio offerings, the band channeled the natural majesty of their surroundings into the recordings. Having spent the prior two years touring relentlessly, the CRB were road-tested and in peak form to capture their kinetic chemistry and immersive sound, which Uncut Magazine called, "...a celebration of how American musical traditions can be at once honored and psychedelically expanded."

The Chris Robinson Brotherhood emerged in 2011 by playing close to 50 shows over nine weeks in California before ever leaving the Golden State or officially releasing music. Their introduction on the national stage came in 2012 when they'd release not one, but two acclaimed full-length albums within a few months of each other. Critics hailed their sprawling debut, ‘Big Moon Ritual,’ as a revelation, with The Independent raving that Robinson had "finally found the ideal vehicle to indulge his taste for 'Cosmic California Music.'" The reviews were similarly ecstatic for its immediate follow-up, ‘The Magic Door,’ which was praised by Relix as "classic rock in the finest sense." The band's epic tour schedule brought their shimmering acid-Americana around the world for a staggering 118-date tour, firmly establishing the CRB as the new standard-bearers of the psychedelic roots torch. In 2014, they returned to the studio for ‘Phosphorescent Harvest,’ a masterful collection that showcased the blossoming songwriting partnership between Robinson and Neal Casal. Rolling Stone raved that the album was "electrifying…boast[ing] a vintage rock vibe that’s at once quirky, trippy, soulful and downright magnetic," and Guitar World called it "a treasure trove of soul that advances the band's bluesy, kaleidoscopic sound."

Writing, recording and creating at a compelling clip, while performing an ever growing number of sold out shows across the U.S., Robinson is as energized as he's ever been in what's already been a long and historic career as one of rock music's most prolific and successful songwriters and frontmen. Joined by guitarist Neal Casal, keyboardist Adam MacDougall, bassist Jeff Hill and drummer Tony Leone, The CRB (as they are affectionally known to fans), are on the verge of their most inspired and prolific year yet. 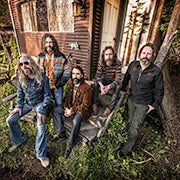