with The Movement and Natural Vibrations

This year has represented a period of growth for the Hawaiian-bred, Santa Barbara-based band, with their career elevating to a new level. Armed with their third full-length album AUTOMATIC, IRATION--Micah Pueschel (Guitar/Vocals), Joe Dickens (Drums), Adam Taylor (Bass) and Cayson Peterson (Keyboards)--further pushed their musical boundaries, with an emphasis on the craft of songwriting, while staying true to the sound their fans love. The band collaborated with Cage The Elephant guitarist Lincoln Parish who is featured on several tracks and helped co-produce select songs on the album along with long-time studio partner JP Hesser of Castaway 7 Studios in Ventura, CA. 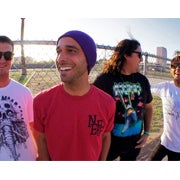