with ELBY Brass - Top Of The Hops After Party

Hailing from Norfolk, VA, Major and the Monbacks have created their own blend of rock n roll, merging retro 60’s rock n roll, psychedelic twang, soaring three-part harmonies, and the high energy and horn laden grit of southern soul. With three songwriters all switching between lead and backing vocal duties, as well as a full 8-piece ensemble that includes a lively horn section and a powerful rhythm section comprised of both a drummer and full time percussion player, the Monbacks have honed a very powerful sound. The band’s debut full length album, available now, has given the band a chance to finally capture the energy and tenacity of their live performances and translate that to a full studio release.

Twin brothers Neal and Cole Friedman founded what became Major and the Monbacks during high school in Norfolk, VA in 2008, teaming up with classmates Michael Adkins, Harry Slater, and Tyler West to form the core group that has driven the continued evolution and success of the band over the last 7 years. Beginning as late night jam sessions in Neal’s bedroom in 2008, the Monbacks transitioned from high school garage band into traveling college band, and finally, after college, into a full time east coast touring band, embarking on a 5 month, 100+ date tour in 2014 that took the band 20,000 miles along the East Coast from Vermont down to Alabama. The band will be hitting the road in mid-April 2015 on a 5-month tour of the Eastern United States in support of their upcoming album. 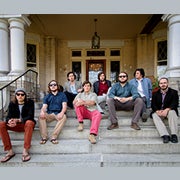