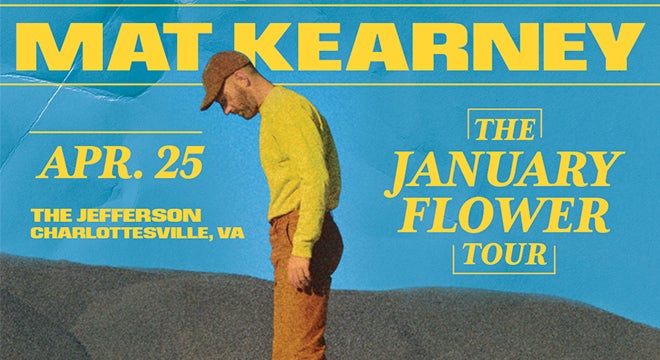 Unexpected, unplanned moments often yield the most beautiful results. That’s how Mat Kearney arrived at his sixth album, January Flower, a collection of honest, stripped down songs that brings the Nashville-based, Oregon-born musician back to his singer-songwriter roots.

In January of 2019, Mat packed up his recording gear and decamped to an isolated house in Joshua Tree with his childhood friend Marshall Roeman, a painter, and songwriter Eli Teplin. The plan was to use their two weeks in the desert to create with a full recording studio, but a massive storm hit, deluging the area in record rainfall and shutting down their power. With the light of the wood burning stove to guide the way, Mat took the opportunity to explore music from a new angle, armed with only his voice and an acoustic guitar.

“You couldn’t see anything from the house but desert and it was so beautiful,” the musician remembers. “This storm came in and we were just in this house, so we started writing songs. We wrote four or five of the songs that are on the record. Stripping it back to me and a guitar and some friends reminded me of how I started and that was the genesis of this record.”

The album’s reflective opening number “Powerless” came from those sessions, with Mat considering what it means to lose power – both literally and figuratively – and embracing the feeling of your life being pleasantly out of control. “That mirrors our experience in life,” Mat notes. “We have all these grand plans and then something else happens and it can become even better than you planned.”

It was in this desert house, accompanied by his friends, that Mat also realized that his next album needed to be as vulnerable and open as possible. He wrote affecting acoustic ballad “Blame” in an under an hour, but found himself hesitating thanks to the sheer honestly in its lyrics. Marshall encouraged him to embrace the words and speak from the heart – a sensibility that pervades January Flower.

“I was thinking about a specific moment I had in my life that I have a lot of regret for and taking responsibility for that, but I wasn’t sure if it would make for a good song,” Mat says. “I was fighting my own inspiration to make it more palatable for people. But we wrote this song that’s simple and has a message of taking responsibility, and doing that allowed me to decide to make a record that is what is.”

When Mat returned to Nashville he carried that spirit into the rest of the writing and recording process, re-teaming with his longtime producer Robert Marvin, who also helmed his 2006 breakout Nothing Left To Lose and 2011’s Young Love. The goal was to create songs with no other intention than simply the joy of making music. For Mat, the year-long process was about rediscovering why he loves writing songs in the first place. He brought in several older songs, including “Can’t Look Back” and “Running In Circles,” reimaging them to fit in with the newer work and kept the instrumentation simple. “Pontiac” was inspired by Bruce Hornsby, with the band tracking live to a pop backbeat, while “Stuck In the Moment” emphasize an organic, approachable aesthetic that allows Mat’s emotional vocals to lead the way.

“The introspection of this year framed that,” explains Mat, who spent 2020 revising and editing the songs he and Robert recorded the year before. “It’s hard to write big party anthems in a year like we had in 2020. I was more introspective and I also craved that, so there’s more that melancholy, simple songwriter stuff. We spent this past year really taking our time. It was a really beautiful way to have perspective on the songs.”

January Flower recalls Kearney’s early work on his gold-selling album Nothing Left To Lose, veering in a different direction from his 2018 album CrazyTalk. The album was also inspired by his acoustic tour in the fall of 2019 to promote the 10th anniversary of The City of Black and White, which was the last time Mat was on the road before everything shut down in the pandemic. His vast touring history, which includes treks with John Mayer, Sheryl Crow and NEEDTOBREATHE, is evident in the vibrancy of the songs, as is his enduring success as a recording artist. The musician has released five albums in the Billboard Top 200, with three in the Top 20, and has seen his dynamic songs placed on Grey’s Anatomy, 30 Rock and NCIS. Overall, he has over 2.5 billion global streams. It’s been a long and winding path to where Mat is now, but it’s a journey he’s happy to still be taking.

“I’m most proud of how I didn’t compromise and stuck to my guns on making something that wasn’t paying attention to a trend,” Mat says of January Flower. “It was about what kind of music I really wanted to hear right now. It was about digging down and finding the innocence that comes with wanting to make music solely for the love and passion of doing it. I wanted to stay true to that voice. The time encapsulated in this two weeks in Joshua Tree was very reflective of my own heart. I needed to be emotionally brave. And by doing that, I get to lead people into their own vulnerability. That’s one of the gifts I want to bring to my music. Music can give you freedom and life, and I hope to lead people through their own inner world as I delve into my own.” 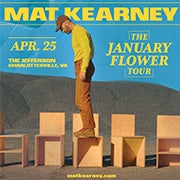