The show must go on! Superunknown will perform a free show in place of the previously scheduled Aquanett show which has been rescheduled to Saturday, March 15 due to an illness in the band. Come out this Saturday for a full evening of your favorite 90's alt rock hits!

For years, Cory Teitelbaum wanted to put together a band to pay tribute to all of the music that influenced him as a young musician; Alice in Chains, Pearl Jam, Soundgarden, Nirvana. In 2010, after years of playing with numerous bands from all over, he decided to finally pull the trigger, and contacted long time friend Rob Richmond to help him organize the band under the name "Superunknown".

The two guitar players had little trouble finding people to fill out the roster, contacting former band mate Bryce Fletcher on vocals, and talented multi-instrumentalist Morgan Moran on bass guitar. Jamie Booth solidified the lineup in 2011, and the band has been turning heads ever since!

Known for spot-on renditions of the great bands of the alt-rock era (from Lit to Tool, and everything in between!), and producing an engaging and entertaining show, Superunknown isn't so unknown anymore! 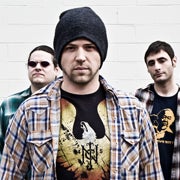